More than four in five (83%) of North Carolina voters believe that investments in early childhood programs will benefit North Carolina’s economy in the short and long term. Voters ranked ensuring children get a strong start as a top priority for policymakers, second only to jobs and the economy and well ahead of reducing the tax burden on families. The poll was conducted by the bipartisan team of Public Opinion Strategies and Hart Research for the First Five Years Fund and the North Carolina Early Childhood Foundation

“North Carolina voters truly understand that when each child is given the best opportunity to succeed—to realize their potential and contribute as productive citizens—North Carolina prospers.,” said NCECF Founding Executive Director Susan Perry-Manning. “Our state has a proud history of innovation and investment when it comes to early learning, and we know more needs to be done. Increased state and federal investments will mean more children can benefit from high-quality early learning programs, which in turn creates better education, health and economic outcomes for everyone in North Carolina.”

The poll comes on the heels of unprecedented state action on early childhood education across the nation –in red and blue states alike. In North Carolina, Republican Governor Pat McCrory signed a 2014-2015 fiscal year budget, which provides an additional $5 million for the state’s public prekindergarten program, NC Pre-K. Only 23 percent of 4-year-olds in the state are currently enrolled in NC Pre-K. Voters want more. Three-quarters said they support expanding access to the NC Pre-K and Smart Start programs so that more children in the state can participate in them.

Voters are very concerned that children get a strong start in school and see high quality early childhood education as the answer. In addition to expanding access to Pre-K and Smart Start, 88 percent want North Carolina to invest in training and classroom resources so that all pre-school and early elementary school teachers are able to teach each child in a way that addresses their individual needs and ensures they have a strong start in reading and school.

Nearly three-quarters of North Carolina voters (71 percent) support greater federal investment in early childhood education if it increased the deficit in the short term but paid for itself in the long term by improving children’s education, health and economic situations. Earlier this year, a national poll commissioned by The First Five Years Fund found that 71 percent of voters – including 60 percent of Republicans – support greater federal investments in early childhood education.

“This data, while compelling, is something parents, educators, business leaders, law enforcement officials and advocates have known for some time,” said FFYF Executive Director Kris Perry. “States and communities, including North Carolina, are willing and ready to invest in kids. But they can’t do it alone. Now is the time for Congress to listen to voters and act to make early childhood education a priority investment.”

In addition to the tools below, check out the poll tookit for more infographics, letter-to-the-editor template and press release template! 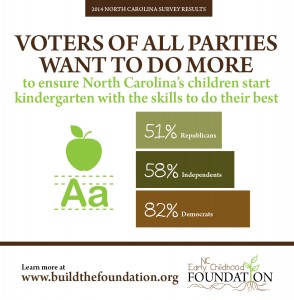 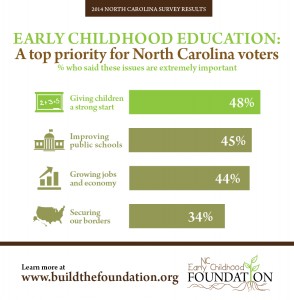