NC Pre-K is serving the same percentage of the state’s four-year-olds that it was 10 years ago, and the program no longer receives the highest quality rating in an annual study of the nation’s state-funded preschool programs. As NC grapples with the COVID-19 crisis and young children face what will be at least a six-month gap in their schooling, questions arise for what will be needed for NC Pre-K in 2020-21 to address what some researchers are calling the COVID slide.

North Carolina’s state preschool program – NC Pre-K – has traditionally been among the highest-quality programs in the country, winning top marks several years running for meeting all 10 quality measures on the National Institute for Early Education Research’s annual State of Preschool Yearbook. NC has typically fallen in the middle of the pack, however, for access – the percent of three- and four-year olds enrolled in the program.

The 2019 State of Preschool Yearbook, released recently, finds North Carolina meeting only eight of the 10 (revised) quality standards. The gap is in training and requirements for assistant teachers.

NC is one of 19 states that meet between eight and 10 of the quality benchmarks. Four states meet all 10, and another seven meet nine of them. NC Pre-K meets the quality standards for:

State investment per NC Pre-K child (including TANF) in 2018-19 was $5,450, down $172 from 2017-2018, adjusted for inflation. This puts NC 20th in the nation. However, this only tells part of the story in NC. Because of the NC Pre-K program’s financing structure – where state funds pay about half of each slot and local matching funds are required – NC’s rank jumps to 9th in the nation ($9,162) when all funding per child (including local funding) is reported. This financing structure leverages additional local funds to support a high-quality preschool program, but it can lead to place-based inequities in access, as individual cities and counties decide how much to invest in the program locally.

State funding for the program per child has declined in the years since 2002 (see graph), while some local governments have prioritized growing the reach of preschool in their counties and cities. 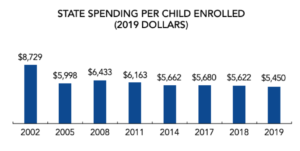 NC’s administration of the public preschool program is unusual among the states in that it is managed out of the Department of Health and Human Services (DHHS), rather than the Department of Public Instruction (DPI). The program was shifted out of DPI and into DHHS in 2011. The state’s other public preschool programs, such as Head Start, Title I Preschool and Preschool Exceptional Children, are run out of DPI’s Office of Early Learning.

Nationwide, more than 80 percent of state preschool programs are administered at least partially by the State Education Agency, while only two others report being structured like NC – where the preschool program reports only to the HHS agency.

NC Pre-K enrolls at-risk 4-year-olds from low-income families who have not participated in other early childhood programs. NC Pre-K programs are required to operate 6.5 hours per day for 36 weeks each year and serve as many eligible children as funding levels permit. To be eligible, children generally must be in a household with income at or below 75% of the state median income (SMI); but up to 20% of children may be in a household with a higher income if they have another designated risk factor. Risk factors include a developmental delay or identified disability, a chronic health condition, or limited English proficiency.

Impact of COVID-19 on NC’s Preschoolers

Research on crises like the one we are currently grappling with demonstrates that young children often bear the physical, emotional and educational brunt when our systems are strained and the adults in children’s lives are stressed. COVID-19 is exacerbating inequities that already existed in our communities, including that some children are more likely to receive the benefits of remote learning than others.

Early educators are an important part of young children’s support systems, and when school starts back up in the fall, NC Pre-K classrooms will likely see the social-emotional impact of children having suddenly lost those connections back in March. Early educators will also see the impact of the trauma children are experiencing during this crisis, stemming from increased family stress as parents become unemployed and from lack of access to basic needs like nutrition as school feeding programs end during the summer. High quality curricula, well-trained teachers, low ratios, health screenings and referrals, and the other quality benchmarks noted by NIEER will become even more essential. In terms of access to the program, it remains to be seen how a recession caused by COVID-19 could impact state investment in preschool in 2020-21.