NC Republicans, Democrats and Independents United in Wanting the State to do More 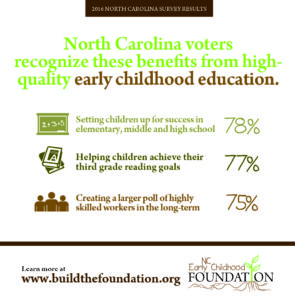 Since 2014, support for early education has continued to rise among North Carolina voters across the political spectrum, according to a bipartisan poll released today by the North Carolina Early Childhood Foundation (NCECF) and the First Five Years Fund (FFYF). A strong majority of Republicans, Independents and Democrats want more investments in early learning—including providing greater access to affordable child care, Smart Start, NC Pre-K, and programs that build parenting skills.

Support for the state’s signature programs – NC Pre-K and Smart Start—also increased, with 70 percent of Republicans (up from 50 percent), 92 percent of Democrats (same as 2014), and 87 percent of independents (up from 73 percent) – wanting to expand access.

“North Carolina voters wholeheartedly agree that building a stronger North Carolina is rooted in ensuring our children have a strong start,” said Tracy Zimmerman, NCECF Executive Director. “There are few issues that enjoy this level of bipartisan support. Every candidate for public office should have an early learning strategy, and voters should ask them about their plans.”

This November, early education will be the top issue for voters. Eighty-six percent of voters rank making sure children get a strong start in life through quality early childhood education as “extremely/very important,” ahead of such issues as reducing the tax burden on families (71 percent) and providing low- or no-cost college (50 percent).

Voters recognize that early learning investments have both short- and long-term benefits. More than three out of four voters say that high quality early learning programs help set children up for success in middle and high school; help children achieve their third grade reading goals; and help create a larger pool of highly skilled workers in the long term.

Additional findings from the poll are highlighted below:

The poll was commissioned by First Five Years Fund in conjunction with a bipartisan polling team of Public Opinion Strategies (R) and Hart Research (D). The sample was distributed proportionately throughout the state and is demographically representative of the electorate.

Recently the First Five Years Fund released the results of its fourth annual national poll, showing a similar trend among voters nationwide. Even in the midst of an angry and polarized election, 90% of voters agree on one thing: Congress and the next president should work together to make quality early childhood education more accessible and affordable to low- and middle-income families.

Use the 2016 NC Poll Toolkit to share the findings with your community.

About the North Carolina Early Childhood Foundation: NCECF is the state lead for the National Campaign for Grade-Level Reading, a national collaborative effort to ensure that more children in low-income families succeed in school and graduate prepared for college, a career, and active citizenship. NCECF builds public will by advancing understanding of birth-through-eight child development and promotes practice and policy solutions that drive aligned action to support each child being on a pathway to grade-level reading. Learn more at http://www.buildthefoundation.org.