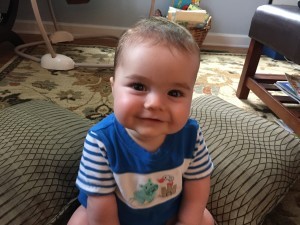 Nearly eight months ago, my wife gave birth to a beautiful baby boy, Henry. Among the many joys of being a father is watching Henry investigate and react to the world around him—he explores my face with his hands, he laughs at silly noises, and he is so attuned to every sound and movement in his environment that he’s often too distracted to finish a meal.

Henry’s brain is growing rapidly, and I can practically see what research from developmental science tells us—that early relationships and experiences actually build the architecture of his brain. Like a house, the brain is built from the bottom up, which makes strong foundations essential to everything that comes later. In fact, the more complex skills he will develop in a few years are built on top of the simple skills he is developing now.

A recent study out of the University of Wisconsin-Madison, published in the Journal of the American Medical Association-Pediatrics illustrates this link between early experiences and brain architecture more starkly than ever before. The study found that growing up in severe poverty—in environments that are more likely to be unpredictable and unstable, where access to quality health care and child care are out of reach, and where nutrition is more likely to be compromised—can put children at a lifelong disadvantage.

Specifically, the researchers found that the frontal lobe and temporal lobe, both of which are critical for academic success, were 8-10% smaller in children growing up in poverty. The subjects in the study, along with the control group, were primarily white children of parents whose educational attainment was above average.

The findings do not mean that these children are lost causes. In fact, the science also points us toward proven solutions. We know that when we provide all children with stable, nurturing relationships and experiences early in life, we can mitigate poverty’s negative impact on brain architecture and pour a strong foundation for children’s future growth and learning.

That said, the implications of this research should be deeply unsettling for North Carolinians, both in terms of our core values and our future prosperity. What do we do with our long-held belief that every child comes into this world with an even chance to succeed? What about our state toast, which proclaims that North Carolina is “where the weak grow strong, and the strong grow great?”

As I look ahead a few years to Henry starting preschool, it seems more important than ever that his potential classmates all have equal opportunity for healthy growth and development. It is unthinkable that some who sit beside him at the mere age of 3 or 4 will already be at a disadvantage.

As for our state’s economy, we’re starting out behind when it comes to economic competitiveness. Statewide, approximately 580,000 children (25% of all children) live in poor families, which means that a full quarter of our future workforce is facing a foundational roadblock to future success.

Fortunately, this problem is not intractable. It’s big, for sure, but we can take steps that mitigate the impacts of poverty and help improve families’ economic circumstances. We actually already know what to do—more and better early education, expanding access to health care for children and parents, and restoring refundable tax credits for working families are all steps state policy makers can take right now to help assure appropriate brain development for all children.

I often tell Henry that he is the “best baby in the world,” and to me, he is. But as much as I love him and as special as I think he is, Henry is no more deserving of an opportunity to achieve his full potential than a child who is born into poverty. We should work as hard as we can to give all North Carolina children a fair shot—our children and our state would be well-served if we did.

Reprinted with permission by NC Child.