Investing in strategies that focus on children from birth to age eight is the most effective and cost-efficient means to improve third grade outcomes and long-term success for children and the state. For optimal development and a strong foundation, children need good health, strong families and high quality early learning and school experiences.[i] With quality early child development experiences, children are school ready, graduate from high school and grow into productive citizens and valuable employees.[ii]

In North Carolina, the Child Care Subsidy Program, Smart Start and NC Pre-K (formerly More at Four) comprise the majority of North Carolina’s state investments in early care and learning prior to kindergarten. Together, they form the infrastructure to deliver evidence-based programs in all 100 North Carolina counties, ensure that children living in low-income working families have access to high quality child care programs and provide at-risk four-year-olds with the opportunity to start school on an even playing field with their higher income peers.

These initiatives are funded through a combination of state general funds, state lottery funds and federal funds. Over the past several years – under both Democrats and Republicans – the state’s approach to funding these initiatives has undergone significant change. Three trends have emerged:

The Child Care Subsidy Program is a two-generation approach that helps children from low-income working families attend high quality early education programs that build a strong foundation for all future learning and supports their parents’ ability to work and become economically self-sufficient. In addition, businesses rely on child care subsidies for their employees to have dependable child care, reducing employee absences and increasing employee productivity.[vi]

Child care subsidy is funded through a combination of state and federal funding with the majority coming from federal funds. Federal funding comes from primarily two sources, the Child Care and Development Block Grant (CCDBG) and Temporary Assistance for Needy Families (TANF). In order to draw down federal dollars, the state must provide matching funds.

Since 2007, state spending on child care subsidy has been on a downward trend. As the recession hit, North Carolina turned to federal funding made available to help states manage their struggling economies.[vii] By Fiscal Year 2008/09, the state was investing less than half of the state dollars it had in the previous year.[viii] Contingency funds from the Temporary Assistance for Needy Families (TANF) made up most of the lost dollars.[ix] The fund was created by Congress for states to use during periods of economic distress.

The state continued to receive an influx of federal dollars through 2011 for child care subsidy through the American Recovery and Reinvestment Act (ARRA) of 2009.[x] As a result, while state funding went down, the impact was partially mitigated by an increase in federal funds.

As the economy continues to recover, state funding for child care subsidy remains below what it was 15 years ago. At the same time, the number of children ages birth through eight living in low-income families (200 percent of the federal poverty level) has increased. In 2005, 498,000 (48%) of children birth through age eight lived in low-income families. By 2013, the number had increased to 585,000 (53%).[xi]

*Smart Start funding for child care subsidy is not included. Smart Start is required to spend a portion of its funding on child care spending. That amount is included in the Smart Start appropriation.

Smart Start is a network of 76 nonprofit local partnerships that serves as the state’s early learning infrastructure to improve the quality of child care programs and implement evidence-based programs to increase the health, well-being and development of children birth through age five in every North Carolina County. The program is mostly state funded, however local Smart Start partnerships are required by law to match 15 percent of those state funds with other resources.

Research by Duke University found that access to Smart Start and NC Pre-K significantly reduced the likelihood that children will be placed in special education in the third grade, and increased third grade reading and math scores.[xiii]

Smart Start public funding peaked in Fiscal Year 2000/01 at $231 million and has leveled out at $151 million since 2011. However, while the General Assembly provides a direct appropriation in the state budget for Smart Start, the North Carolina Department of Health and Human Services (DHHS) has been required to apply budget reductions across DHHS which has reduced the Smart Start allocation by $1 million in Fiscal Year 2012/13 and $3.7 million in Fiscal Years 2013/14 and 2014/15, bringing the funding for the program down to $147 million. 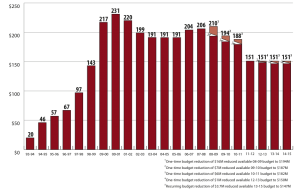 Since 2001, North Carolina has provided full school day, public prekindergarten, now known as NC Pre-K, to more than 255,000 children. It is one of only five programs in the country to meet the National Institute for Early Education Research’s (NIEER) 10 quality benchmarks for preschool programs.[xiv]

In the latest evaluation of NC Pre-K, researchers found that children are progressing at an even greater rate during their participation in NC Pre-K than expected for normal developmental growth.[xv] Earlier research showed that at the end of third grade children from low-income families who had attended pre-k had higher reading and math scores on the North Carolina end-of-grade (EOG) tests and fewer special education placements than similar children who had not attended the state’s program.[xvi]

Historically, NC Pre-K (formerly More at Four) has been paid for with both state general and lottery funds. Total funding for NC Pre-K peaked in Fiscal Year 2008/09 at $170.6 million, comprised of almost an even amount from both sources. [xvii]

As with child care subsidy, the state began decreasing its general funds investment in favor of federal TANF funds when the recession hit.[xviii] In Fiscal Year 2009-10 state general funds decreased from $86 million to $53 million. 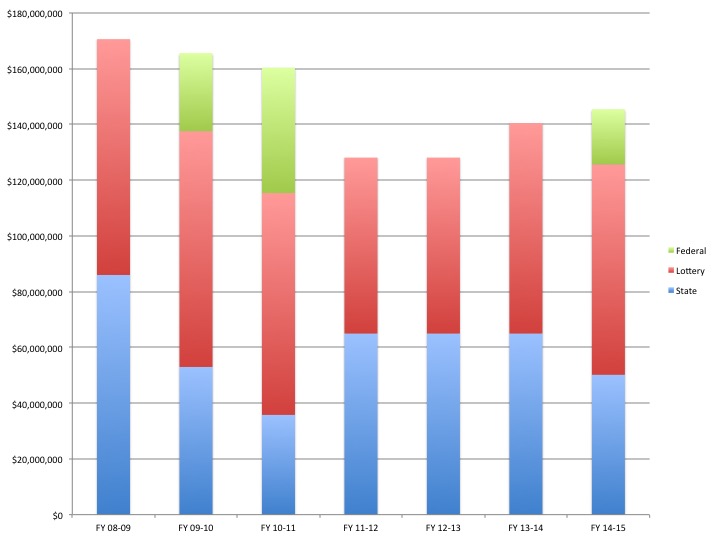 In Fiscal Year 2013/14, state funding for these three programs comprised 1.21% of the State’s General Fund Budget.[xx]

While each program has its own direct appropriation, operationally early childhood programs combine state and federal funding so that programs work for families, to maximize efficiency and to serve as many children as possible.

Note: Additional programs like early intervention[xxi], home visiting[xxii], child care resource and referral[xxiii], Head Start and Early Head Start[xxiv] are vital components of ensuring that children have the optimal experiences to allow them to fulfill their potential. These programs either rely on federal dollars and/or comprise a significantly smaller portion of state dollars.

[xii] All subsidy spending data is from the NC Division of Child Care Development and Early Education.

[xvii] In FY 08/09 funding for NC Pre-K (then called More at Four) was comprised of $86 million of state general funds and $84.6 million in state lottery funds.

[xx] Total State General Fund Budget for FY 13/14 was $21.08 billion. State funding for the Child Care Subsidy Program (excluding Smart Start) was $43.58 million; for Smart Start (including the DHHS applied cut) was $147 million and for NC Pre-K was $65 million.

[xxiv] Head Start and Early Head Start programs support the mental, social, and emotional development of children from birth to age 5. In addition to education services, programs provide children and their families with health, nutrition, social, and other services. These programs are federally funded.