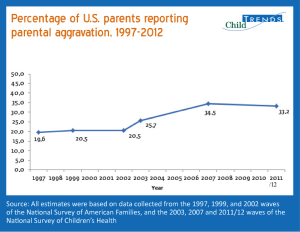 While frustration is a normal part of parenthood, too much of it can impact the ability to parent effectively. So a new report by Child Trends on parent aggravation levels is cause for some concern.

The researchers measured aggravation among parents living with their children, ages
birth through 17 by:

There are several evidence-based programs designed to assist families with effective parenting, including: